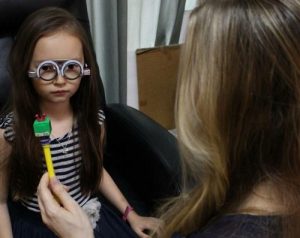 • 1 in 10 children is at risk from undiagnosed vision problem
• 1 in 30 children will be affected by amblyopia (lazy eye)
• 1 in 25 develops strabismus (crossed-eyes)
• 1 in 33 has significant refractive error such as near-sightedness, long-sightedness and astigmatism

These are 5 common eye and vision problems in children:

Myopia (or shortsightedness) occurs when the eyes are unable to focus clearly on objects that are far away. The image falls ‘in front’ of the retina when one looks at a distant object. This does not usually affect close-up vision except in high myopia.

Myopia is the result of a mismatch between the eye’s focal length and its overall size. In high myopia, it is understood that the myopic eyeball is ‘too long’ due to abnormal eye development during childhood.

Based on research using ultrasound axial length measurements, children were found to have elongated eyes. Their myopia progresses more quickly as their eye growth hastens and hence they require stronger glasses.

Singapore has one of the highest prevalence rates in the world for myopia. It is the most common problem in school-age children. Similar trends have been reported in Taiwan and Hong Kong. More than half of our children develop myopia by the age of 12 years. Hence, myopia is no longer simply considered as a vision anomaly, but it is also regarded as a significant public health issue.

A recent study showed the 3-year cumulative incidence rates of myopia is 47.7% in 7-year-old children. This is a concern as the earlier a child develops myopia, the higher the tendency of developing severe myopia later in life.

Hyperopia (or longsightedness) occurs when the eyes are unable to focus clearly on objects that are close-up. It can also affect far distance vision in some cases. The image falls ‘at the back’ of the retina when one looks at a near object and it often makes it difficult for the eyes to focus.

It can occur in both children and adults. But this is not the same as ‘presbyopia’ which often affects middle-aged adults.

In severe cases, hyperopia can make it difficult for one to focus in all distances and it is often associated with headaches and eyestrain. In young children, a high/moderate degree of hyperopia can also be related to strabismus.

Eyes that suffer from astigmatism often has irregularly (or ‘toridally’) shaped corneas. The cornea is the front part of the eye. Astigmatism has also been attributed to the shape of the natural lens in the eye – although this is less often so.

It often occurs together with myopia or hyperopia and it can result in blurred vision.
Even without myopia or hyperopia, the astigmatic eye will not be able to focus sharply and one might complain about glare or visual discomfort particularly in poor lighting.

It is often associated with headaches, dizziness and eyestrain.

Strabismus is sometimes called a ‘squint’ or ‘crossed eyes’. The two eyes may turn in different directions in a child or an adult.

When one eye is aligned well, the other may turn in or out, up or down. This may be noticeable all the time or it may be intermittent. It may be present soon after birth or appear at a later age. It may be due to a weak eye muscle or a nerve palsy.

Some people get their eyes surgically realigned whilst others may get ‘orthoptic’ eye exercises. The latter is also called vision therapy and it often involves the use of prisms and a range of equipment to re-train the visual system.

Amblyopia is sometimes called a ‘lazy eye’. The affected eye fails to see things normally due to a disruption to normal vision development during childhood. This may affect the child’s visual perception.

The visual impairment from amblyopia can persist during adulthood if treatment has not been previously offered. This is because the brain has learnt to ‘ignore’ or ‘suppress’ the images coming from the poorer eye. These deficits derives from the visual areas of the brain.

Treatment involves normalizing the poorer eye (often with glasses and/or eye patching) and re-training the eyes and the brain to work in a normal way (often with orthoptic eye exercises, called vision therapy). The treatments are most successful for young children, but adults can also benefit in vision therapy.

Font Resize
Contrast
Accessibility by WAH
Call Us Text Us